There is no doubt that Jeff Koons is the embodiment of a ‘Marmite’ artist. You either hate him or you ‘really rather like him’.  He is a showman and a businessman whose works have sold for many millions at auction – and he is a provocateur. His lifestyle has often collided with his art - his short-lived marriage to the Italian porn star Cicciolina is a case in point, adding to his notoriety and, one suspects, his bank balance. This backstory is bound to have an effect on how his output is perceived – it either consigns his works to the outer reaches of kitsch or you smile and recognise the playfulness and craft (not always Koons’ craft, but always his conceptions) behind the work. In fact Koons would not recoil from the use of words like kitsch – he is quite happy to see his work labeled as ‘popular’ art and seeks to counter the pejorative connotations attached to such art.

For me it is the shiny-shiny pieces which force their way into my affection. His first such ‘Celebration’ sculpture was an oversized balloon puppy dog made of stainless steel with a mirror-polished finish made in 1994. At this exhibition the first encounter with one of these pieces is inspired by the paleolithic Venus of Willendorf, the bulbous outline of which, lends itself to the impression of a number of party balloons somehow twisted together by a circus entertainer. But these magenta ‘balloons’ belie the industrial process behind their manufacture. In the same room a ballerina adjusts her shoe and two more ballerinas prepare themselves for a performance – all presented in mirror-polished steel and all coloured in Koons’ restricted palette of comic book hues.

The last room contains a series of paintings which at first sight seem to be large scale digital reproductions of well known paintings such as Géricault’s Raft of the Medusa. However, on closer inspection it becomes clear that they are in painted reproductions. A glance at some explanatory notes tells the viewer that the paintings are the work of Koons and assistants – rather in the manner of Rubens’ famously large workshop and those of many renaissance masters. However, rather disconcertingly, in front of the lower part of each painting a blue sphere is installed in the same stainless steel as we had seen in the previous room. There is a rather confusing explanation involving his childhood in Pennsylvania where people apparently place globes of differing colours in the windows of their houses but I was not quite sure the juxtaposition working in this context. 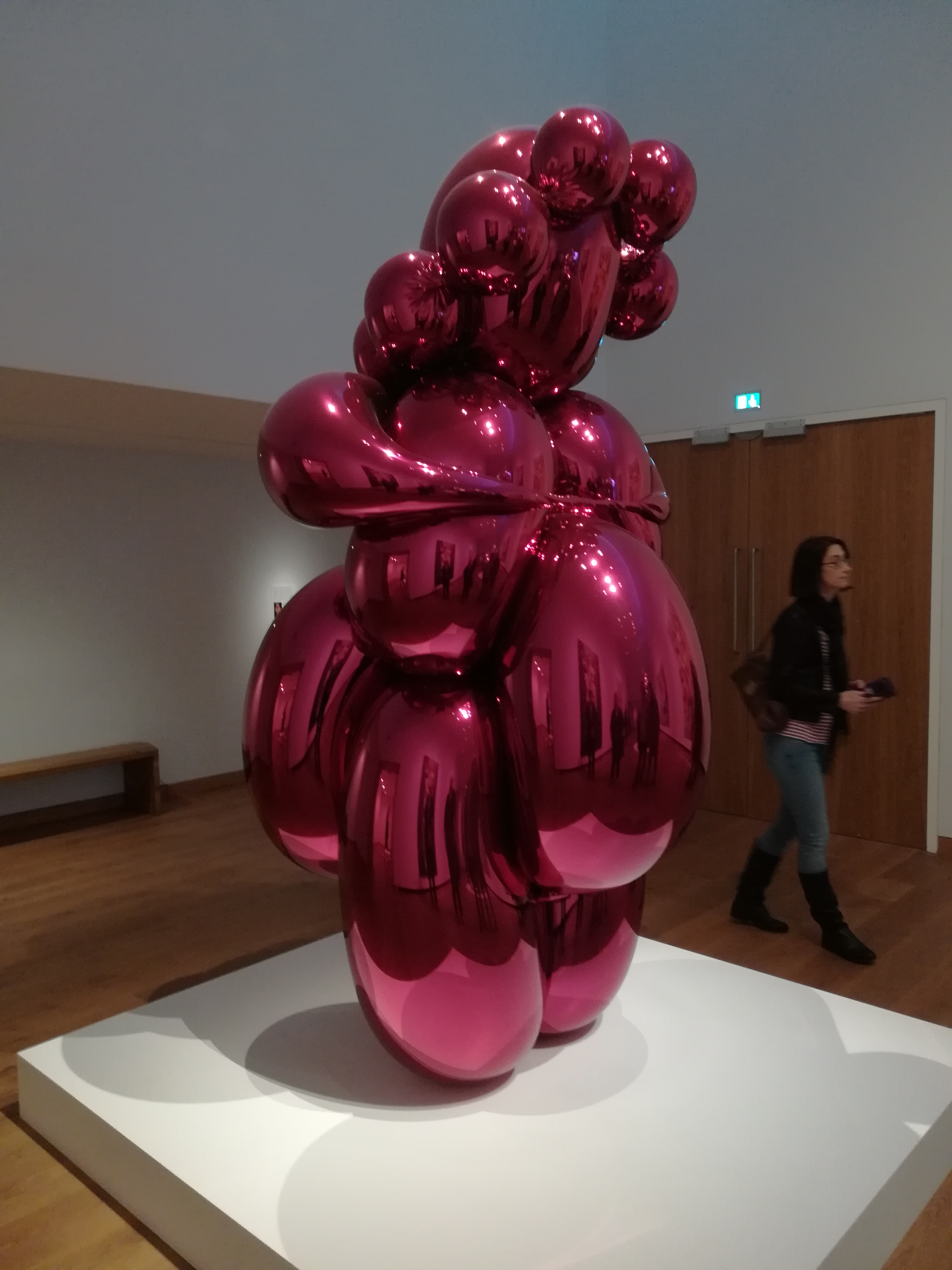 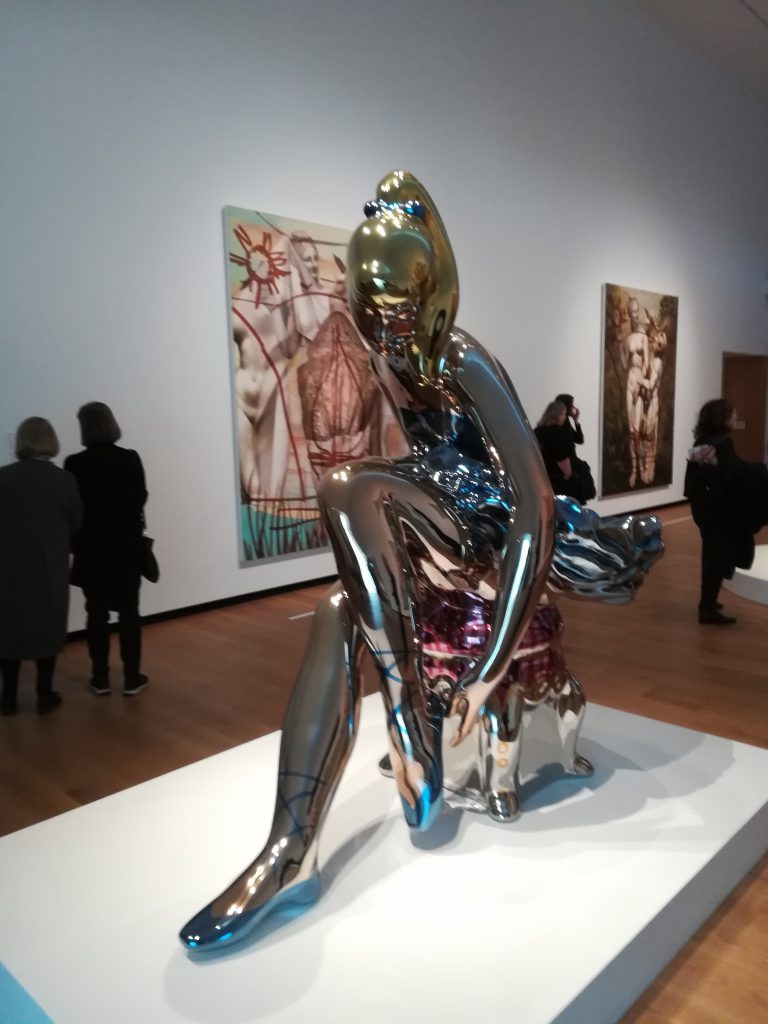 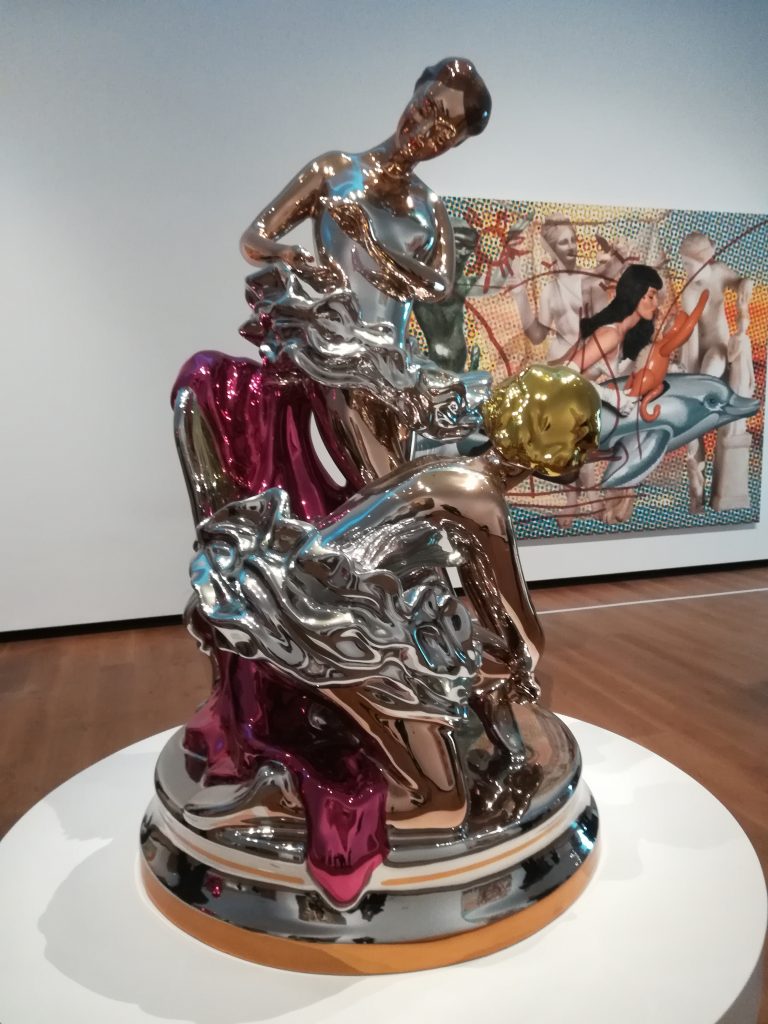 Link to the Ashmolean Museum