Vienna has the most extensive collection of works by Pieter Bruegel in the world. How did so many paintings by the Flemish master  come to be in Vienna? Owing to the complexities of late medieval dynastic inheritance the Low Countries became part of the sprawling Habsburg Empire in 1482. In 1594 Archduke Ernst, the brother of Emperor Rudolf II, became governor of the Netherlands and on his death a great number of pictures in his collection were taken to the Habsburg capital. Most of the Bruegel paintings in the Kunsthistorisches Museum today can be traced to Archduke Ernst's collection.

The five extant panels featuring the Seasons of the Year are among Bruegel's finest works. Originally commissioned by the Antwerp banker Nicolaes Jongelinck, three hang in the Kunsthistorisches Museum. One is held by the Metropolitan Museum, New York and the other is in Prague. Art historians did not identify the five panels as part of a series until the 1920’s. This precipitated a lengthy debate as regards the original number of panels that formed the cycle – were there twelve months? – in which case there were seven missing – or were the paintings a depiction of the four seasons? – in which case one panel was superfluous to requirements. Recent research has shown that there were originally six paintings, linked to the labours of the year, and probably divided bi-monthly. Arguments persist but a reasonable case can be made for the three panels in Vienna to be considered as: 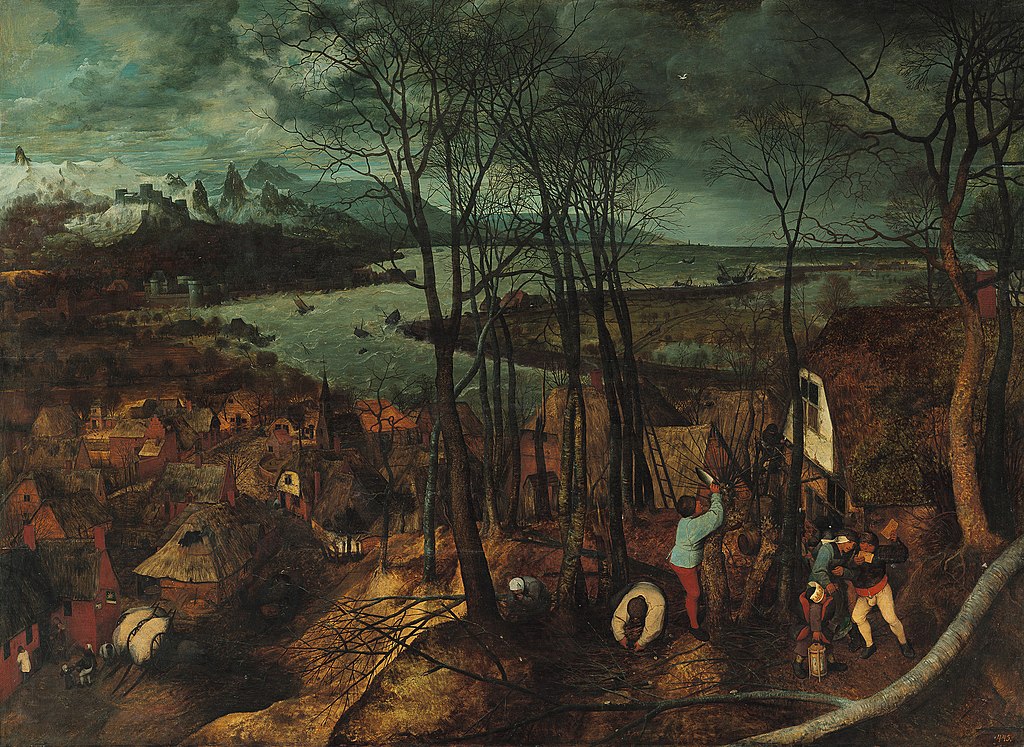 The Gloomy Day has been the title of ‘Early Spring’ for a century. Cleaning has revealed a stormy but somewhat less gloomy scene. The viewer, from a high standpoint, can see the maritime casualties of  a storm; one vessel has broken its back on the promontory and another is in trouble. March is producing its usual crop of inclement interludes. In the distance we can see that the mountains retain a covering of snow (he would have crossed such terrain on his journey to Italy in 1551). At the head of the bay a village huddles, sheltered from the open sea by the mountains and the spit of land in the middle distance. Thatched cottages cluster at the foot of a hill which dominates the foreground. Peasants have climbed this prominence to engage in one of the tasks associated with that time of the year just before Spring fully materialises – they are diligently pollarding and lopping trees. Nearby a family group are engaged in eating waffles – the young boy wears a paper crown – signalling the traditional  revels associated with Carnival held just before Lent – which fell in February or Early March, depending on the liturgical calendar. 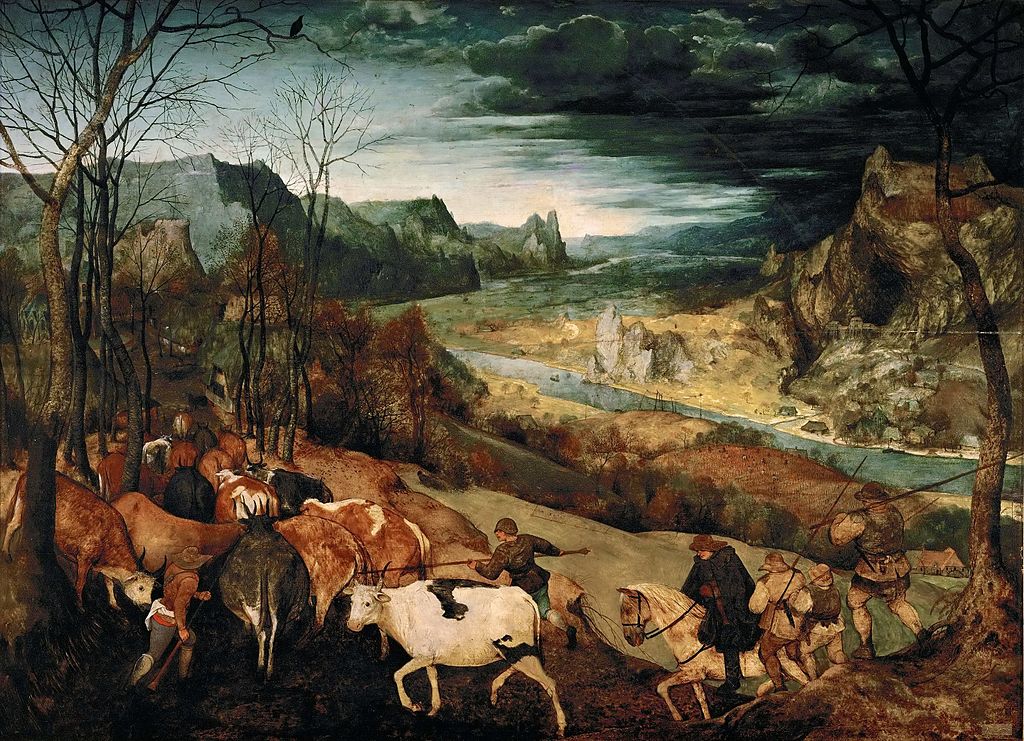 The Return of the Herd (Autumn)

We are witness to the seasonal movement of men and animals known as transhumance – in this case, the return from summer pasture in the mountains to the shelter of lowland grazing for winter – an event that would, of course, not have been seen in the Low Countries but which Bruegel recalled with the assistance of a number of sketches from his travels to Italy.

This takes place in a landscape not dissimilar from the Gloomy Day – mountains fringe a coastal inlet and storm clouds advance from the right, signifying the onset of the darker days of late Autumn and a change from the earlier sparkling weather to the left. The year has turned and the fattened beasts are prodded onwards by their attendant herdsmen down the path between the avenue of leafless trees towards the waiting village. The vastness of the scene is the context in which this particular microcosm of the cycle of life is portrayed – a tenuous existence where the arrival of the herd is a vital element in the survival of the settlement through the coming winter.

Bruegel does not reproduce a topographical representation of a particular scene but presents us with a dramatic tableau of nature’s grandeur and of man’s (more specifically his wonderfully observed peasants) place within it. 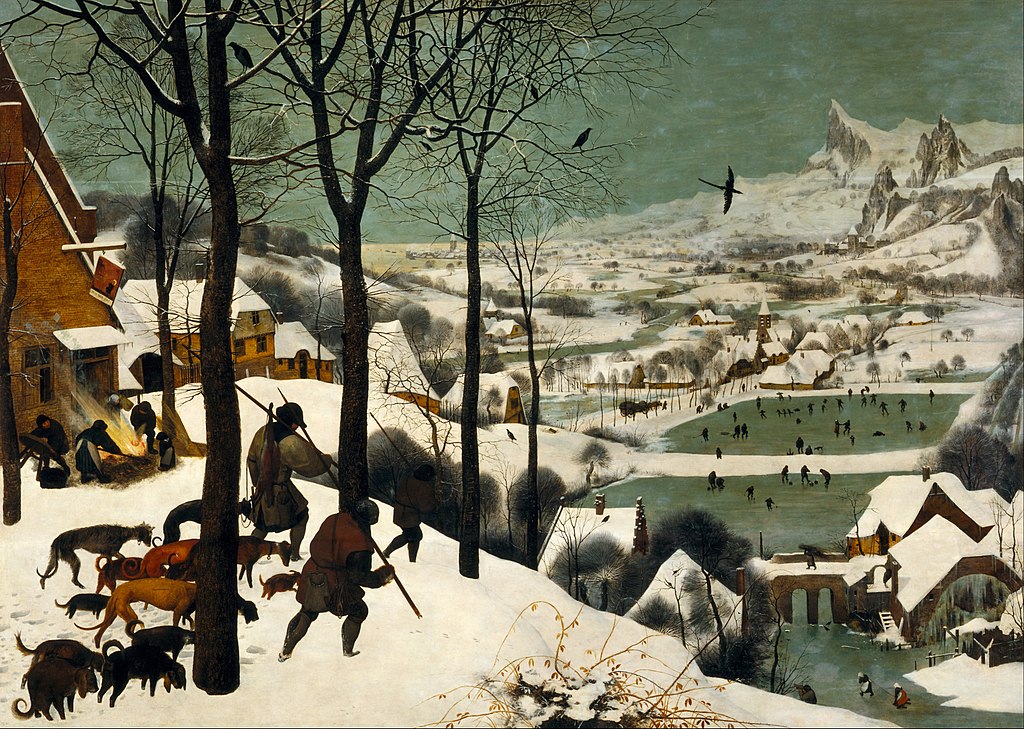 Hunters in the Snow (Winter)

This is one of Bruegel’s most famous, and much reproduced, works. The scene is clothed in heavy snow, the sky is overcast; the hunters, closely attended by their pack of dogs, return to the village with their meagre catch. In common with the other four surviving panels depicting the seasons the viewer surveys the scene from a high vantage point giving a clear view of the extensive landscape. The hunters cross a high bluff intent on descending to the main part of the village below. Such an icy landscape may not have been an unusual event in the second half of the sixteenth century. This was the start of the ‘little ice age’ which inflicted very cold winters on Europe and beyond for perhaps two centuries and more. As the hunters trudge on we can see the carcass of a pig being singed outside an Inn – one of the traditional activities emblematic of deep midwinter.

Our eye follows the four skeletal trees as they descend the slope where the viewer can see children skating on the ice which has formed on the rectangular lakes below. A magpie flies above the black figures of the skaters; the black branches of the trees, and the crows roosting in them, contrasts with the predominantly cold white, blue-green and grey-green Bruegel has used for the landscape. This picture has become an exemplar for one of those bone-chilling days in December or January. 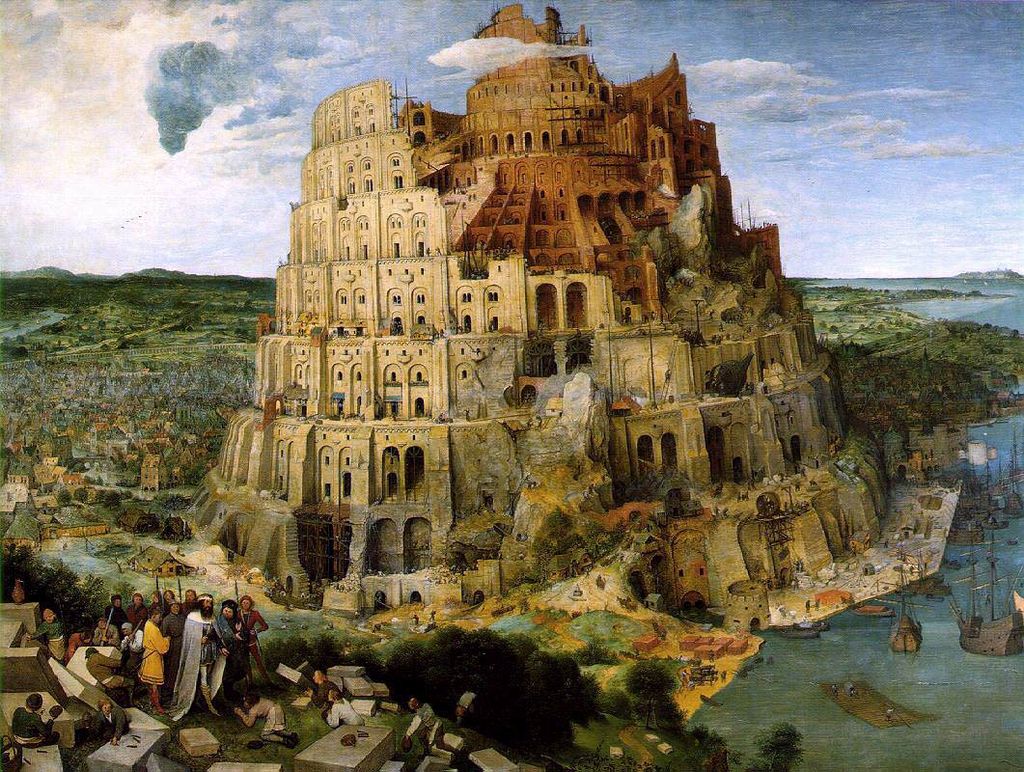 According to the Book of Genesis the generations after the Great Flood spoke a single language. They migrated to a land called Shinar where they built a city with a tower tall enough to reach heaven. However, God, observing this project, decides to “confound their language, that they may not understand one another’s speech. So the Lord scattered them abroad from thence upon the face of all the earth: and they left off to build the city.” Precisely why the deity should do this is uncertain. Perhaps it was punishment for the hubristic intention of reaching heaven or maybe His aim was to spread cultural difference across the earth.

The fecundity of Bruegel’s imagination in translating this subject into paint is breathtaking. He triumphantly captures the sheer immensity of this insane architectural project, a structure so colossal that a cloud has formed at its highest extent – so immense that it encases a mountain. Labourers scurry about the many unfinished areas like so many ants, working on the timber frames used in the construction of the huge arches, climbing perilous ladders or erecting scaffolding. It is almost as though Bruegel is illustrating a manual of civil engineering techniques of the day. But as if to emphasise the scale of the task, many workers have built dwellings on the structure, presumably to avoid the time-consuming descent to ground level. And perhaps the obviously uncoordinated progress of the project is an indication that all is not well in regard to the grand plan. As we can see, the unfinished upper stages reveal a staggeringly complex ‘onion-layered’ design. Can the, admittedly massive, base support such an immense weight? Is it possible that the structure will ever be successfully finished?

Around the dominating presence of the tower lies a Flemish city complete with defensive wall. Church spires are hardly discernible, dwarfed by their overbearing neighbour. A bridge spans a river which powers a number of mills. The harbour is busy with all types of shipping. One wonders how the inhabitants view this monstrous project on their doorstep; a source of employment, certainly, but also a looming reminder of human folly and pride? 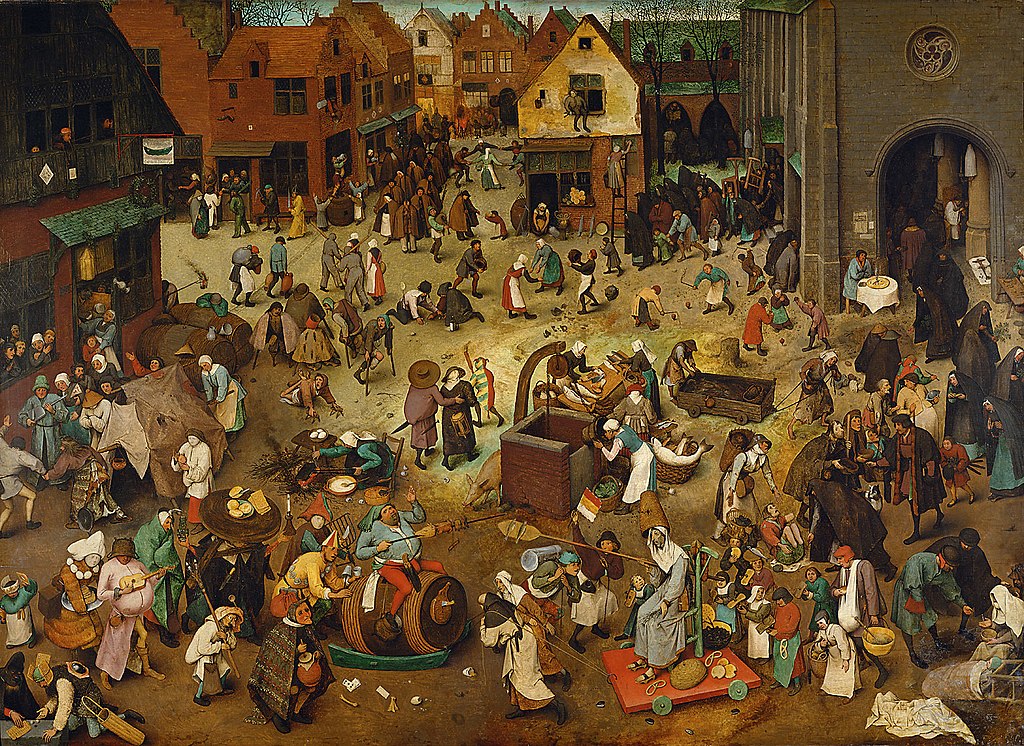 Battle between Carnival and Lent: 1559

In 1551 Bruegel left Flanders and travelled for three years through France to Italy. The architecture of the Tower of Babel was almost certainly based on that of the Coliseum which he saw in Rome.

This painting is one of the ‘encyclopaedic’ group of pictures of around 1559 to 60. Bruegel is not trying to impute a moral or political point of view. Much of the clamorous action is humorous, but not overtly critical. As one can see, he is greatly interested in peasant life representing the diversity of the subject in the form of a ‘survey’. All the customs and traditions of Carnival and Lent take place in a town square. The space is bounded by the opposing institutions of the church (and Lenten customs) on the right and the inn (and Carnival celebrations) on the left. The battle between corpulent Carnival and emaciated Lent takes place in the foreground. A shrovetide play, ‘The Dirty Bride’ (a gypsy wedding), is performed outside the Blue Boat Inn to the left – nearby a procession of the disabled and beggars look for alms.

In the far right corner of the square the Lenten faithful exit from the north door of the church, some carrying their chairs. Nearby children are spinning tops and towards the foreground a relatively well-dressed burgher gives alms to another group of beggars while in the extreme right foreground two men donate to the dying who have been brought to the vicinity of the church.
Research has shown that the portrayal of the each custom and costume are described in minutely accurate detail. The effect is indeed exhaustively encyclopaedic and somewhat overwhelming but, of course endlessly fascinating. To list and explain all of the activities, customs and traditions would constitute material for a book.

Link to the Kunsthistorisches Museum