Michelangelo and Perugino at the Sistine Chapel

Some time ago I was part of a great stream of tourists visiting the Vatican, herded along a circuitous route through many beautiful rooms, loggias and passages including those decorated by Raphael. Eventually we all progressed through some doors into the Sistine Chapel where all eyes immediately elevated to take in the world famous ceiling painted by Michelangelo. This is an undoubted marvel in regard to the sheer manual effort involved in singlehandedly designing and covering such a large ceiling (although he did have assistants to help with some of the more menial tasks). Of course the central depiction of God creating Adam is rightly one of the world’s most revered images. But am I the only one who remains unmoved by Michelangelo’s stupendous endeavours? The central theme of the Creation lends itself to Michelangelo’s fixation with the human body, to the exclusion of just about everything else in the diety’s grand plan. But, as if he is not content with his labours to master the corporeal essence of humanity, Michelangelo continues to populate the rest of the ceiling with an assemblage of figures often twisted into evermore extreme – and, it seems to me, unnecessary – contortions. My eye wandered across the multitude of figures searching for some relief from the monomania; my attention flagged and as I lowered my gaze I became aware of a frieze on the two longer walls beneath the ceiling and windows. Here I found that relief. 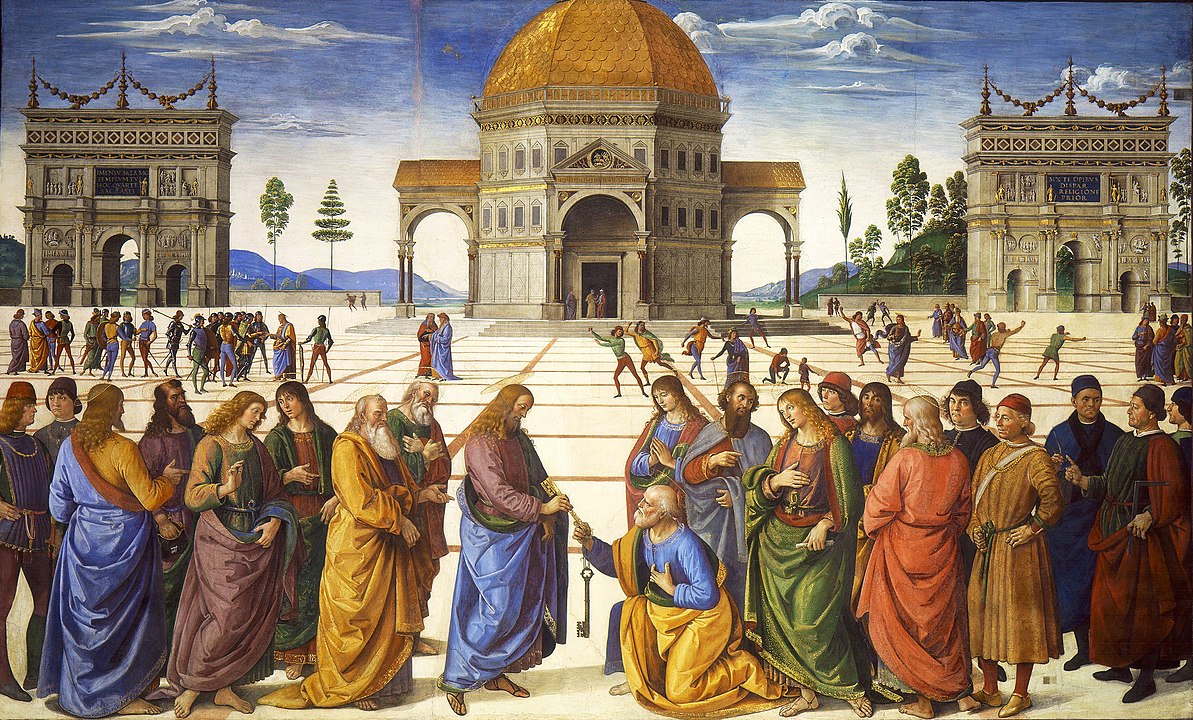 Perugino: The Giving of the Keys to St Peter

Nearly thirty years before Michelangelo was commissioned to paint the Sistine ceiling an Umbrian painter, Pietro Perugino was in Rome working on a fresco in Old St Peter’s for Pope Sixtus IV. The Pope was obviously pleased with the results as he immediately engaged Perugino in 1481 to plan a cycle of frescoes, probably in collaboration with the Florentine Sandro Botticelli, to decorate the newly refurbished Cappella Magna (later named after the the incumbent pope). Other Florentine artists (principally Domenico Ghirlandaio and Cosimo Rosselli) were drafted in to help paint several frescoes for the frieze on the lateral walls of the chapel. The Life of Christ was the theme for the south wall and the Life of Moses for the north.

One of the scenes from the Life of Christ stands out from the rest – for me, the most beautiful fresco in the Sistine Chapel, and one of the most magnificent of all quattrocento paintings. This is Perugino’s depiction of Christ Giving the Keys to St Peter.

The first thing that strikes the viewer is the intense luminosity which floods the scene imparting a crystal clear presence to the groups of figures, the architecture and the enchantingly etherial, but believable, landscape beyond. The exquisitely manicured trees which thrive in this prospect add to the feeling that what we are seeing nears perfection. The symmetry of the composition enhances this perception. The keys form the focal point of the foreground from which a central axis dissects the piazza ending at the doorway of the central building. The chequered pattern in the stone pavement emphasises the artist’s mastery of perspective.

We are witness to Christ giving the Keys to St Peter: “You are Peter, the Rock, and on this rock I will build my church… I will give you the keys to the kingdom of heaven”. Peter is accompanied by the other apostles (including Judas who can be seen complete with halo – fourth from the left). A number of fifteenth century dignitaries, in contemporary dress, are mixing with the saintly throng. A number have been identified including, standing at the extreme right, Giovannino de’ Dolci, the architect of the Sistine Chapel, holding his set square, and the somewhat chubby face of Perugino himself, three to the left of Dolci wearing a black hat over his longish hair.

In the middle ground two scenes from the New Testament are depicted – the story of Peter and the Tribute Money to the left and the Stoning of Christ[ Gr 522-1] (John 8:59) to the right.

Towards the rear of the piazza Perugino has invented a perfect renaissance architectural set piece. The central domed building is probably intended to be a representation of the Temple of Jerusalem but owes much to Leon Bastista Alberti’s theories of an ideal architecture. This is flanked by two arches which are based on the Arch of Constantine in Rome (built to commemorate Constantine’s victory over Maxentius at the Battle of Milvian Bridge in AD 312). Inscription panels compare Sixtus IV to Solomon.