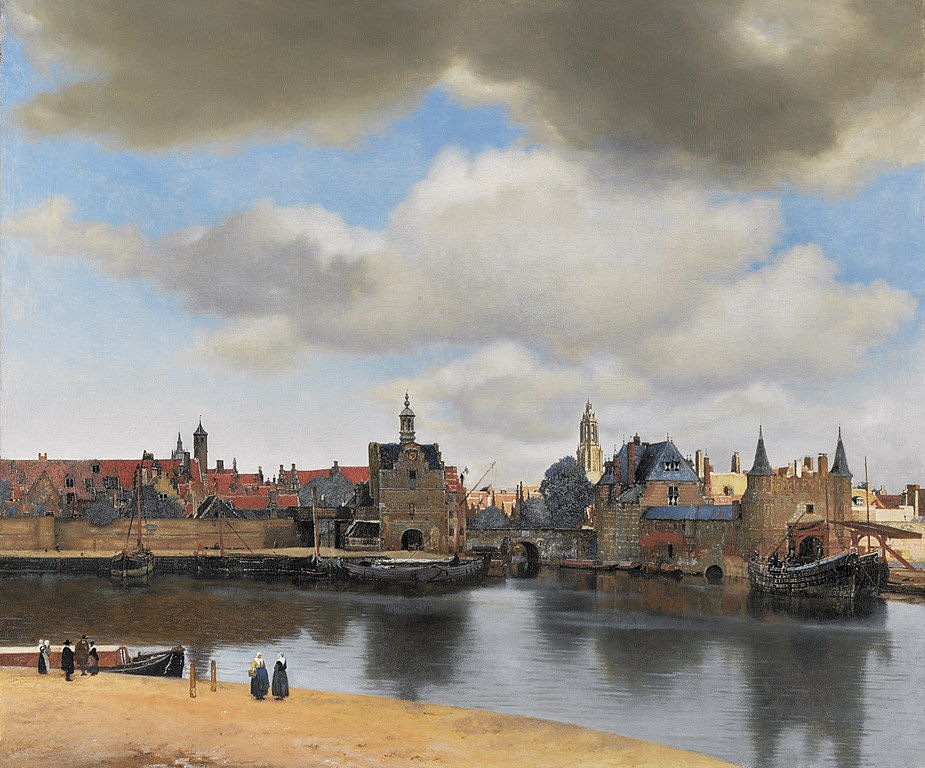 On entering Room 15 at the Mauritshuis Picture Gallery in The Hague, the visitor’s eye is immediately drawn to perhaps the most famous townscape in all of western art. Johannes Vermeer’s great work is one of only two paintings to have survived that are devoted to this subject (which was something of a Delft speciality). The great majority of his output featured interiors, usually inhabited by one or two individuals. In these interiors he exhibits his complete mastery for replicating the effects of light in paint; how it penetrates the glass of a 17th century window, how it falls on the skin of a woman’s face and lips or forms the highlight on the surface of a pearl or the brass studs securing the fabric of a chair seat.

This consummate facility is here transferred to the requirements of a large architectural view (nearly 1.2 metres in width). The sky is dominated by cloud but there are areas of blue through which sunlight illuminates certain parts of the city, especially the tower of the Nieuwe Kerk (New Church) which rises in the middle distance. To accentuate the contrast between those parts of the city illuminated by the sun and those in shadow, Vermeer has applied highlights of yellow to those roofs and the church tower. The darker clouds casts a shadow on the mass of calm water in the foreground. This is the Kolk, the harbour situated to the south of the city. To the right, the Schie canal connects Delft with Rotterdam. A section of the city wall can be seen to the left and in a central position we see the Schiedam Gate which is linked by a bridge to the Rotterdam Gate to the right (both no longer in existence). Just as he does in his interiors, Vermeer brings an intense clarity to every part of the painting allied to a profound serenity; tiny points of white paint have been added to the hulls of the moored boats as a way of suggesting flickering reflections from the water. The red roof tiles on the buildings behind the city wall have been constructed using tiny dabs of red and brown paint; sand has been added to the under-layer to reproduce the rough quality of the tiles. The reflections of the waterfront buildings in the placid but slightly ruffled water of the Kolk are beautifully rendered. The painting is a catalogue of extraordinary technique.

Although Vermeer’s reputation endured a period of relative obscurity during the eighteenth and early nineteenth centuries his work was certainly in demand immediately after his death. View of Delft commanded the highest bid at an auction in 1696 – 200 guilders. Now, of course, the fifty or so canvases attributed to Vermeer are priceless, their very scarcity contributing to their fame.

Link to the The Mauritshuis, The Hague