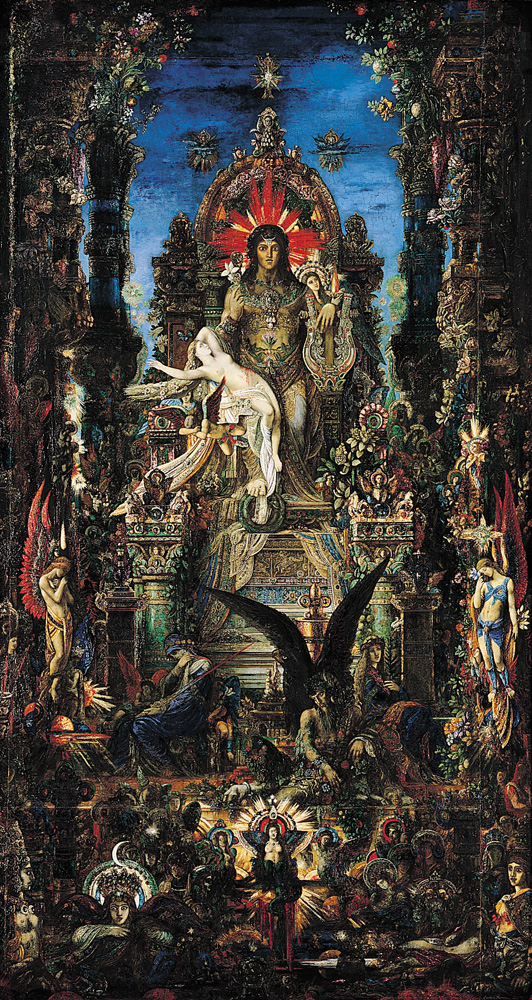 This work assaults the eye with myriad forms constructed from a kaleidoscope of colour. The heavily impastoed surface builds, in places, to further enhance the jewelled surface – every inch is encrusted with detail. As one peers more closely, various vegetative and animate forms detach themselves from the cacophony.

Dominating all is the form of the ultimate deity, the lord of the heavens and supreme judge, Jupiter, seated in majesty on a monumental throne which forms the backdrop to perhaps half of the picture. His frightening glare directly engages the viewer like an all-powerful eastern potentate ready to dispense death and destruction at the merest whim; the ornamentation of his body adds credence to this hint of the east, as does that sensational throne, a wondrous feat of architectonic imagination.

One of the victims of Jupiter’s unbounded power swoons on his lap – diminutive flotsam cast asunder by his might. She is Semele – seduced by Jupiter (who remained invisible during the proceedings) she conceived a child. Enraged by this, the goddess Juno, inveigles Semele into asking Jupiter to show himself to her, knowing of the dire consequences of such a request. According to myth, when Jupiter dutifully accedes to Semele’s plea she is incinerated by Jupiter’s ever-present bolts of lightning. Jupiter then saves the unborn child by ripping the foetus from Semele’s body and sewing it into his thigh. Bacchus is later delivered into the world in these most unusual circumstances. Moreau has omitted to represent the lightening bolt but the wound from which the foetal Bacchus has emerged can be seen in the side of the stricken Semele.

The small winged figure beneath Semele may be the emerging Bacchus. At the foot of the throne, Jupiter’s eagle, symbol of his power, can be seen, wings readied for flight. Flanking the eagle are two female figures, Death, clad in blue, holding a bloodied sword, and Pain, crowned with thorns. Pan, the Arcadian shepherd god, sprawls on a ledge in front of the eagle – half man and half goat, he is wreathed in flowers and vegetal tendrils like a medieval Green Man. Beneath the ledge a shadowy underworld can be glimpsed full of barely defined forms, flanked by two sphinxes, perhaps representing past and future. To the left, clearly outlined against the gloom, a glowing many-layered halo behind her head and a crescent moon hovering above an elaborate crown, the goddess Hecate confronts us with a stare which is every bit as intimidating as Jupiter’s. She is associated with magic, witchcraft, the moon and sinister nocturnal creatures but is also the guardian of crossroads and offers protection to warriors, hunters and herdsmen.

All this, and of course much more, had to be explained in depth to the (perhaps bemused) purchaser of the painting, Leopold Goldschmidt. One of the last major works completed by Moreau before his death, Jupiter and Semele is a synthesis, perhaps a summation, of Moreau’s aesthetic and scholarly interests drawing on (and fusing) a plethora of sources and recondite references, from the Greek myths, and those of India and Egypt, to the occult and neo-Platonism. The Renaissance and Baroque art of the Low Countries and the work of Edward Burne-Jones were also influential. The picture that emerges is an illustration of the quest to find answers to fundamental questions of human existence and the nature and power of the divine.

Although Moreau refused to exhibit with the younger Symbolist painters who were so inspired by him, his influence on later generations was profound not only through Symbolism (a reaction to the materialism of the time; a movement which celebrated the realm of the spirit, the world of dreams, visions, the occult and the irrational) but also through his pupils, Henri Matisse, Albert Marquet and Georges Rouault.

Link to the Gustave Moreau Museum