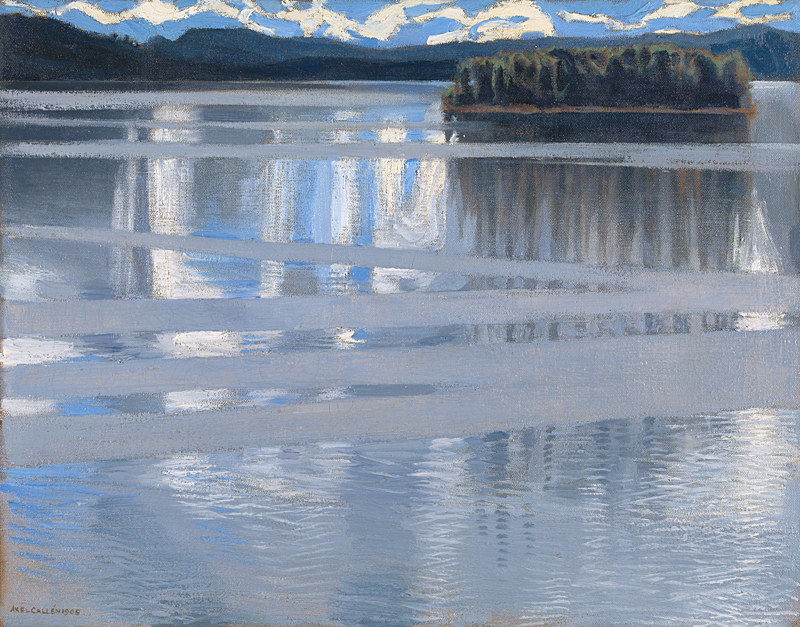 I first saw this painting about fifteen years ago – not long after it was purchased by the National Gallery in 1999. I caught sight of it across a room full of Post Impressionist masterpieces; its distinctive originality immediately drew me towards it. A decade or more later the National Gallery created a small exhibition in which this canvas was displayed along with three similar versions of the same view by Gallen-Kallela which were loaned by various museums from his native Finland.

Since 1809 Finland had been an autonomous Grand Duchy within the Russian Empire. Before that it had spent 700 years as part of Sweden. But by 1900 there was considerable pressure within the country for independence, a sentiment which had been growing since 1835 when the Kalevala was published – an epic poem based on Finnish folklore, legends, songs and poems compiled by Elias Lönnrot. This was a pivotal moment in Finland’s identity. Akseli Galen-Kallela was deeply influenced by this heroic tale populated by bards, wizards and magic and he became an important figure in defining the visual culture of the nascent country. He was also an internationalist who lived and studied in Paris and travelled extensively in Europe. In early 1904, while staying in Granada, he became ill with malaria and had to return to Finland to recuperate.

He retired to a Villa overlooking Lake Keitele, a vast mass of water in the centre of the country featuring an endlessly complex shoreline and countless islands. There he completed many works including this atmospherically serene portrait of the lake. A dark and brooding wooded island is squeezed into the top corner (almost as forbidding as one of Böcklin’s islands) the reflections of its massed trees cascading down the right half of the composition. The water’s rippling surface is beautifully rendered but is interrupted by the most startling aspect of the whole painting, the thick silver-grey bands slicing through the vista. These are in fact a representation of natural meteorological phenomena caused by the conjunction of underlying currents meeting surface breezes. But Gallen-Kallela gave us another interpretation of these curious occurrences: they were ‘Väinämöinen’s wake’ caused by the passage of a boat belonging to a central character in the Kalevala – an enchanter and boat builder. So, armed with this knowledge the viewer understands the deeper mythological relevance of a seemingly prosaic but beautiful and haunting landscape.

Link to the National Gallery, London