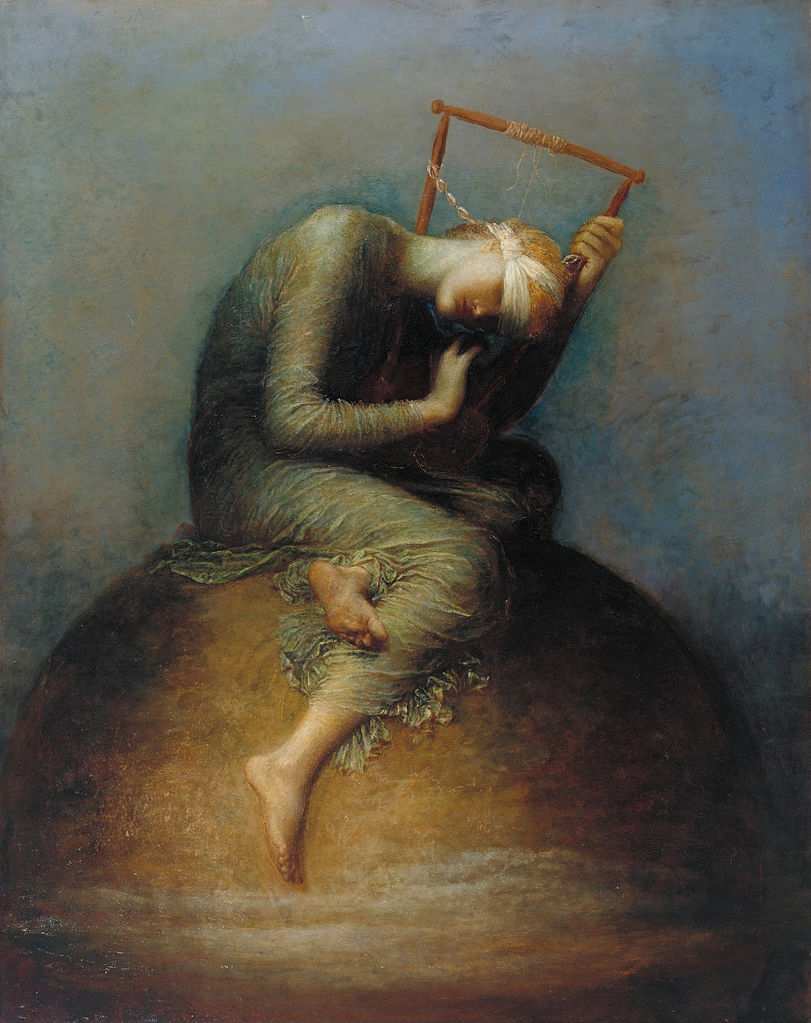 Hope is one of the Theological Virtues (Faith, Hope and Charity) traditionally represented as women.

In 1886 George Frederick Watts completed two versions of his take on one of the Virtues, the subject of many images since antiquity and the Renaissance. He sold the original version and painted a second variant which he believed to be superior and which he bequeathed to the nation. The differences were mainly in regard to the handling of colour but the size of the figure in the second version is slightly smaller and the globe slightly bigger.

These small differences in the scale of the blindfolded female figure in regard to the globe seems to add to an atmosphere of isolation. The writer G. K. Chesterton went further and suggested that the central figure whose lyre is irredeemably broken – only having one string intact – elicited a feeling of despair rather than hope. Watts’ symbolist inclinations embraced the ambiguity inherent in his treatment of the subject – as his famous remark maintains ‘I paint ideas not things’. This obviously chimed with the public as reproductions of Hope became immensely popular.

The concept of a figure sitting on, or associated with a globe had been employed before. Watts’ friend Edward Burne-Jones had used a similar association in 1870 in a paining entitled Luna and the American artist Elihu Vedder had also used a similar motif in an illustration called the ‘Throne of Saturn’ for a well-received edition of the Rubaiyat of Omar Khayyam. However there is no doubt that Watts’ concept is strikingly original, its elusive power demanding one’s attention.

Although Watts’ reputation was waning by the time of his death in 1904 this particular image had become internationally famous and his association with symbolism meant that he was taken seriously among a new generation of artists in France. Pablo Picasso’s blue period masterpiece of that year The Old Guitarist echoes the stance of Hope.