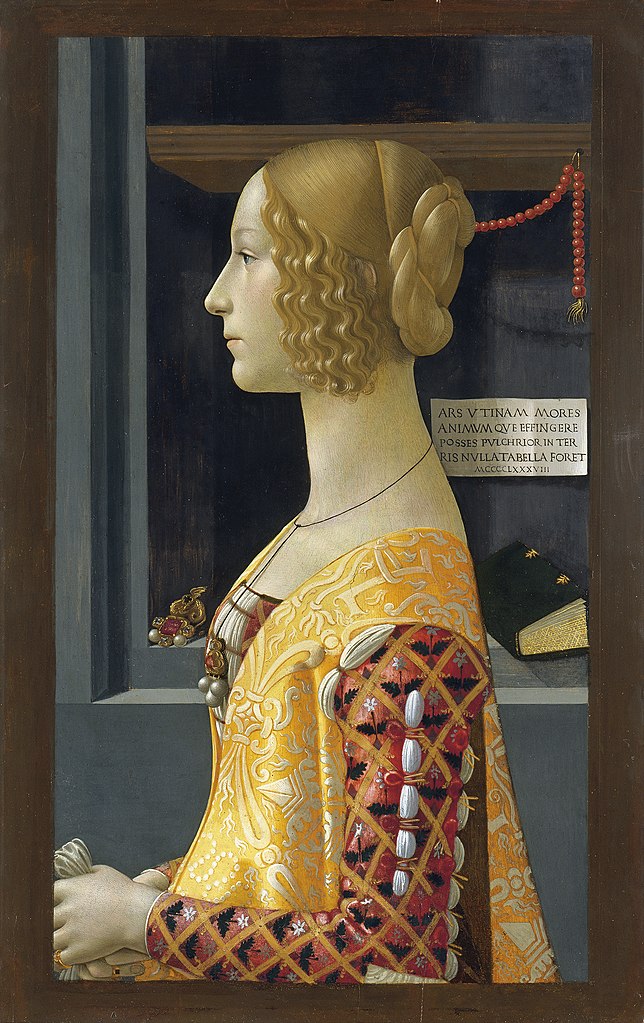 Giovanna is shown in stiff profile illuminated by a searching light. Her sumptuous costume and elaborate hairstyle as well as the few objects displayed in the minimalist background are realised with hard-edged clarity. The rigid profile was a favoured format for Florentine portraits of this period (resulting in a formality which had already been discarded by some near contemporaries such as Leonardo). Her face is expressionless, denoting a certain gravitas and the proportions of her body are idealised, especially her unfeasibly elongated neck.

The portrait was commissioned by Lorenzo Tornabuoni after his wife’s death in childbirth in 1488. The precise date is conveniently displayed in the text of the ‘cartelino’ which appears behind Giovanna. The latin inscription is a quote from the Roman poet Martial and translates as ‘Would that you could represent character and mind! There would be no more beautiful painting on earth’ 1488. Giovanna’s identity is confirmed by her inclusion, sporting the same complex hairstyle, as a witness to The Visitation, a fresco by Ghirlandaio in the Tornabuoni chapel (in the church of Santa Maria Novella in Florence). A contemporary medallion featuring Giovanna also shows her with the same coiffure and supplies her name.

Her ostentatious gown and the pendant she wares featuring a large ruby and three pearls, together with the precious objects displayed in the recess behind her, attest to her status and the wealth of her husband. The Book – possibly a book of hours – signals her devoutness and also her education.

Domenico Ghirlandaio was part of a generation of talented Florentine artists born in the second quarter of the fifteenth century (including Andrea del Verrocchio and Sandro Botticelli). He achieved great success necessitating the establishment of a large workshop employing many apprentices. Michelangelo was one such trainee.