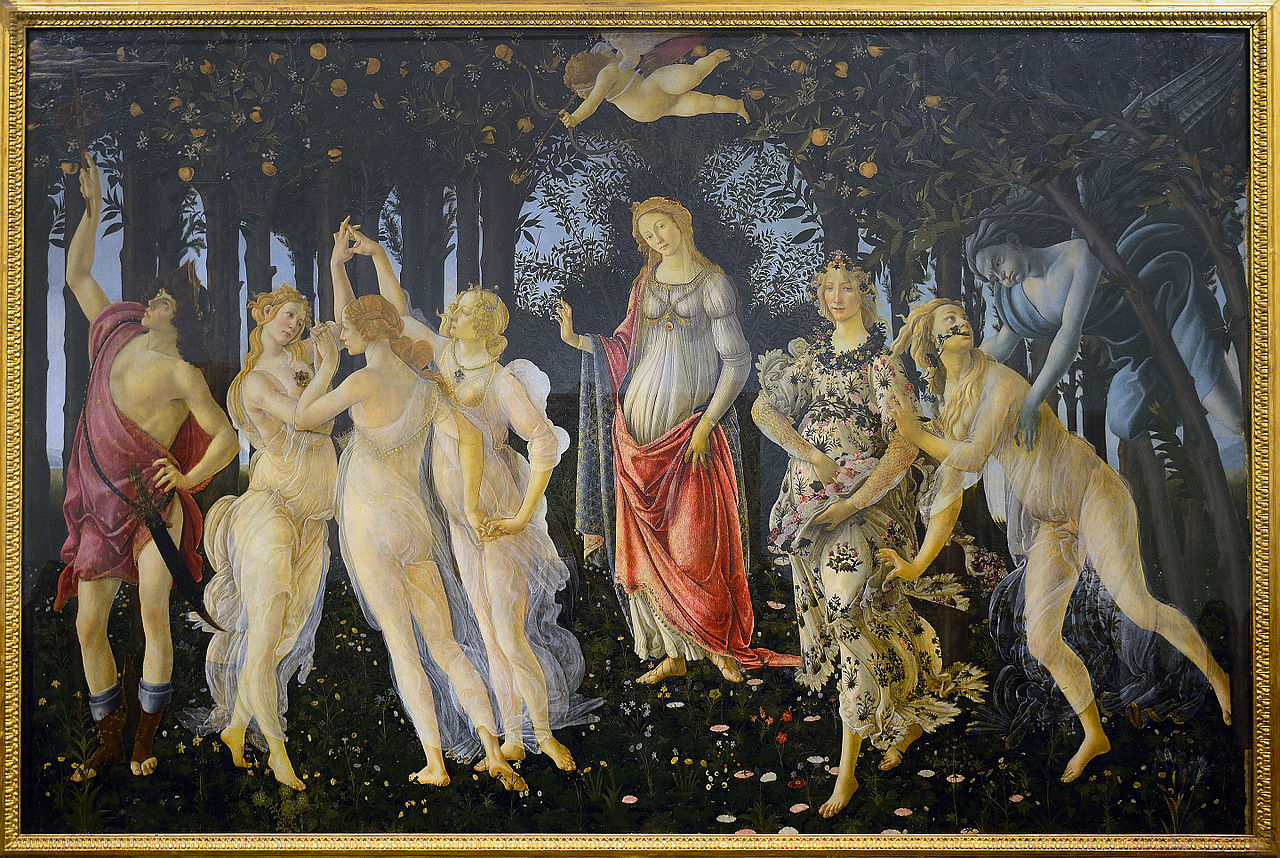 To enter a room in the Ufizzi and come face to face with this stunning painting is a momentous experience. Seeing reproductions in print and online doesn’t prepare you for its scale – over 2 metres in height and well over 3 metres in length. It is perhaps Botticelli’s greatest achievement.

In the 1470s a number of artists and their patrons became interested in moving away from art as a purely representational exercise – a mirror to nature – towards the use of a symbolic vocabulary using pagan mythology based on the writings of the Neoplatonist philosophers (Plotinus, c. 204/5 – 271 AD, being the most important). The rediscovery of these and other classical writings was, of course, one of the main drivers of the Renaissance but the imagery of late antiquity re-emerged in a subtly transformed way gaining new meanings and attributes. One of the most intriguing paintings to emerge from this period was Sandro Botticelli’s Primavera but over the centuries the clues to the ultimate meaning behind Primavera have become obscured.

In the 1490’s Primavera seems to have been in the house of Lorenzo di Pierfrancesco de’ Medici, the ward of the older Lorenzo, the Magnificent, who probably commissioned the work. The painting features nine characters from ancient Latin texts, principally Ovid’s Metamorphoses and other works by Virgil and Lucretius. They are arranged like a frieze in front of a plantation of orange trees, on a verdant ground bearing some similarity to the Millefleur backgrounds featured in medieval tapestries.

Since the beginning of the nineteenth century, with renewed intellectual interest in Botticelli, there has been much scholarly debate regarding the meaning of this collection of mythological figures and many theories have been propounded including astrological schemes, musical allegories, the mathematics of Pythagoras, the classical Golden Age, and many, many more. However the following description seems to represent the most widely held view, at least in regard to the superficial meaning of the figures.

The painting can be read from right to left. The god of winds, Zephyrus has just ravished Chloris, the spring nymph who transforms into Flora, the goddess of flowers, surely one of the most beautiful female figures of the Renaissance, suitably clothed in a flower-garlanded gown. The flowers which trail from the mouth of Chloris link her with Flora, possibly as dual manifestations of ‘fertility’. This sequence may signify the hoped-for arrival of the warm west wind and the end of winter (seen in the dark lifeless section in the extreme upper right of the composition from which the icy, blue-grey wind god emerges).

The central axis is inhabited by Venus, the goddess of Love, who, according to the sixteenth-century writer and artist Giorgio Vasari, is associated with the month of April. Cupid, her son is hovering above and is just about to release an arrow aimed at the central member of the three dancing women alluringly clothed in diaphanous drapes. These are usually considered to be the Three Graces but may be the classical Hours. The male figure, picking an orange, completing the ensemble on the left is Mercury who is associated with the month of May – so the arrangement of the protagonists takes us from early spring though to the month of May.

The various divine characters are curiously detached – there is very little interaction. Within this rather confined tableau each individual or group seems cocooned within a personal reverie. The clothing of the female figures perhaps invites an admiring ‘male gaze’. There is more to this painting than is encompassed by the single word attached to it as a title.

In 1940 the historian Jean Seznac wrote of Primavera that ‘the ultimate secret has not yet been penetrated’. More generally, alluding to all of Botticelli’s mythological paintings, he noted that they ‘conceal illusions of a personal and private nature … with their air of remoteness and the unreality of their setting. They transport us to another world … to the Elysian Fields … The great enigmas of Nature, Death and Resurrection seem to hover about these dreamlike forms of youth, love and beauty – phantoms of an ideal Olympus.

One can imagine its owner displaying his knowledge of the classics in front of the picture with his leaned friends, all basking in their membership of the literati and their shared understanding of its ultimate meaning.