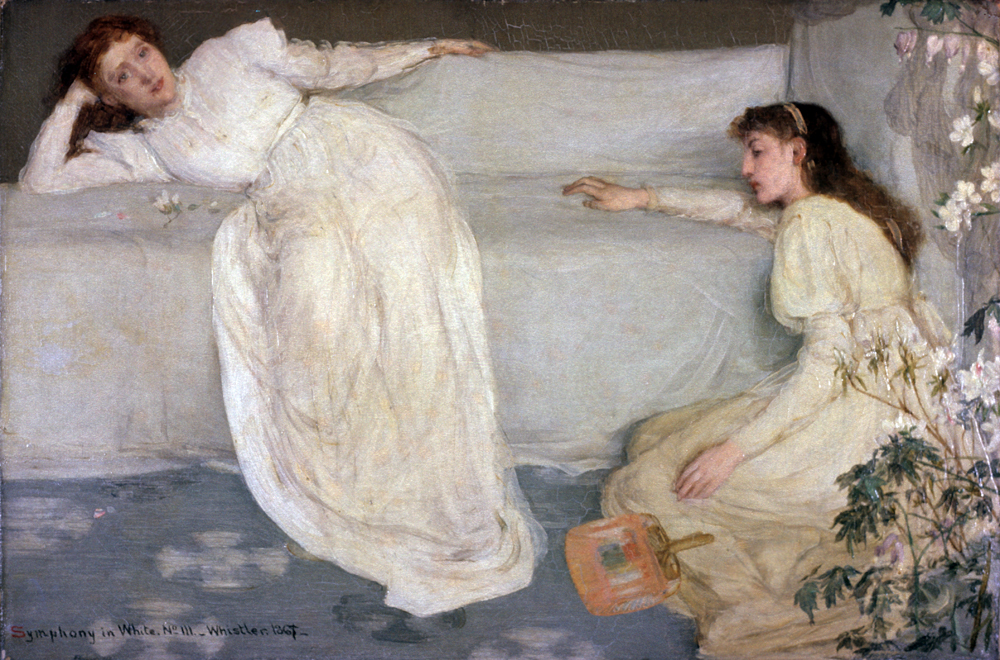 Two women, one in white the other in a light cream dress, seem to be consumed by introspection – ennui pervades their listless postures. To the left the young woman with red hair subsides onto one elbow and stares out at the viewer; the remnants of a flower lay beside her on the divan – some of the petals have been plucked, perhaps absent-mindedly. She is Joanna Heffernan, an Irish artists model who had been Gustave Courbet’s muse and was now Whistler’s mistress – apparently no shrinking violet. The other woman, lost in thought, sits on the floor, one arm extended on to the couch. It seems that her Japanese fan has eluded her grip and now rests against her leg. One feels that its owner is barely aware of its current location, so lost is she in her reverie.

The presence of the fan together with the blossom-laden shrubs which encroach from the right are emblematic of Whistler’s devotion to Japonisme – the considerable influence of the art of Japan on French and British art during the last half of the nineteenth century. This influence fed into the thinking of the Aesthetic movement, of which he was a leading advocate. He believed that an artist should not strive for representational accuracy, rather he or she should aspire to create a harmonious and decorative composition – a painting should be judged as a beautiful object and valued for its aesthetic impact rather than its subject matter. This was summed up at first in France as ‘l’art pour l’art’ which is usually translated as Art for Art’s Sake. Whistler’s use of musical terms for his titles emphasised this attitude, using words such as ‘symphony’, ‘arrangement’ or ‘nocturne’ to drive home his focus on harmony and composition rather than verisimilitude.